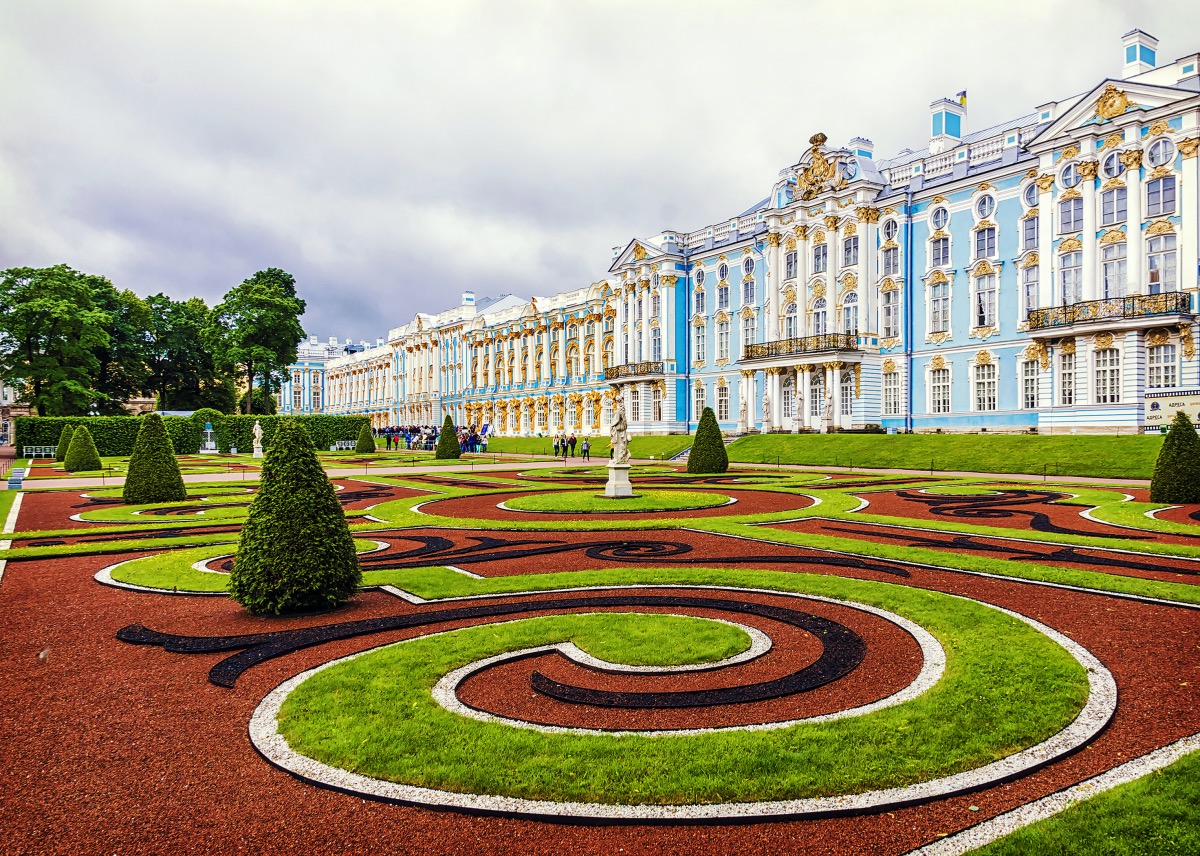 When visiting Russia, spectacular palaces seem to adorn almost every village, town, and city. On all my trips to Russia, the most impressive palace would have to be Catherine Palace in Pushkin just outside St. Petersburg.

I will never forget my first trip to St. Petersburg, Russia. It was early March, and even though technically spring, it was cold, freezing.

As we walked along the main street, the Nevsky Prospekt, I was amazed to see people selling ice cream. What was even more impressive is that people lined up to buy it, even in this weather. As we got closer, I noticed that the vendor was selling them directly from the box. He wasn’t keeping them in a freezer; it was so cold he didn’t need one.

One of the palaces curiosities is its location in the town of Pushkin, 24 km (15 mi) from St. Petersburg. In the morning before leaving, I looked at brochures in the hotel reception and noticed Catherine Palace, Tsarskoye Selo.

Is there more than one Catherine Palace?

In short, no. The Russian Royal family built a summer residence in the town, and many of the country’s nobility followed. As a result, the town became known as the Tsarskoye Selo or Tsar’s Village.

They renamed it Detskoe Selo or the Children’s Village with the Russian Revolution. In 1937, the Soviets decided to call it Pushkin, a dedication to the writer Alexander Pushkin, who had died that year.

Catherine Palace must be Catherine the Great

Again, no. One of Russia’s most well-known rulers, Peter the Great, defeated Sweden in the Great Northern War in 1721. Part of the spoils was a farm, Saari Mojs (the high place), that sat on a small hill south of St. Petersburg.

Peter gave the estate to his wife, Catherine I, who decided to renovate the building and create a new summer residence. So, the palace is a reference to Catherine I, not Catherine the Great or Catherine II.

She replaced the wooden house with a two-story sixteen room building and created a garden with terraces, stone staircases and ponds. Even in the early stages, the palace was impressively decorated, with several rooms finished in polished alabaster and incredible tapestries adorning the walls.

In 1741, after several very shady deaths, Peter the Great’s daughter, Elizabeth, became Empress of Russia. Elizabeth’s life resembled one never-ending party, and over the next 15 years, she made many changes that reflected this. She expanded the palace façade to more than 300 m (985 ft) by developing the main house, adding two side wings, a chapel and a conservatory.

The Italian architect, Rastrelli, connected many of the buildings with a series of formal rooms known today as the Golden Enfilade. The enfilade includes many of the palaces’ most famous rooms, such as the Portrait Hall, the Great Hall with its spectacular painted ceiling, and the famed Amber Room.

The Amber Room one of the many highlights when visiting the Catherine Palace. Initially installed in the Berlin City Palace, Berlin, Germany, the then Prussian King, Frederick William I, gave the room to the Russian Tsar Peter the Great in 1716. Tsarina Elizabeth, Peter’s daughter, decided to install the room in the Catherine Palace. Over ten years, with Russian and German engineers, she constructed a 55 m² (590 ft²) room to house the 6 tonnes (13,000 lb) of amber.

The amber panels, backed with gold leaf and mirrors, were so impressive that many considered it the “eighth wonder of the world”.

The outer walls of these aligned and interconnecting rooms created the palace’s impressive façade. Today the façade is one of its most iconic images, with the white columns and sky-blue walls.

Elizabeth also expanded the gardens, enlarging the pond and adding islands, a toboggan slide, a menagerie, and a hunting pavilion. Her goal was to construct a palace that would rival the French Palace of Versailles, built just outside Paris. She certainly did that. At the time of her death in 1762, the Catherine Palace included 40 state apartments and more than 100 private and service rooms.

Catherine the Great, who ascended to the throne in 1762, continued to add to the palace in a more reserved Baroque style. She converted the side wings from one-story to four-storey, built a new staircase, the Green Dining Room, the Blue Drawing Room and the Silver Room.

Catherine also expanded the gardens adding the Chesme Column and the Akbul obelisk to commemorate her victory in the Russo-Turkish War. Like many Romanovs, the Empress was a massive fan of music, so she added a new Opera House and Music pavilion.

With Empresses death in 1796, additions to the Catherine Palace and gardens stopped. Later Russian Emperors preferred the smaller and more intimate Alexander Palace, which Catherine built for her grandson and future Tsar Grand Duke Alexander Pavlovich.

The Nazis and World War II

In 1941, the German army invaded Russia and began laying siege to St. Petersburg, then Leningrad. The siege lasted almost 900 days until a revitalised and motivated Soviet army broke it in 1944. Shortly after their arrival, the Nazis dismantled the palace’s famed Amber Room and sent it to Königsberg in Eastern Prussia to store it in the town’s castle.

After the war, the public never saw the Amber Room again.

In 1979, the Soviet government decided to create a replica of the Amber Room. Using original drawings and black and white photos, Russian and German experts attempted to recreate the 350 different shades of amber in the original panels and fixtures. After 24 years, the room was inaugurated in 2003 to commemorate the 300th anniversary of the founding of St. Petersburg.

For anyone staying in St. Petersburg, a visit to the Catherine Palace is one of the many must-sees. TRAVEL by bwd vacations offers a range of tours by premium tour operators such as Trafalgar, Insight Vacations, Luxury Gold and Costsaver that visit St. Petersburg allowing you to see the incredible Catherine Palace.

Whilst you’re there, you might try the ice cream also.