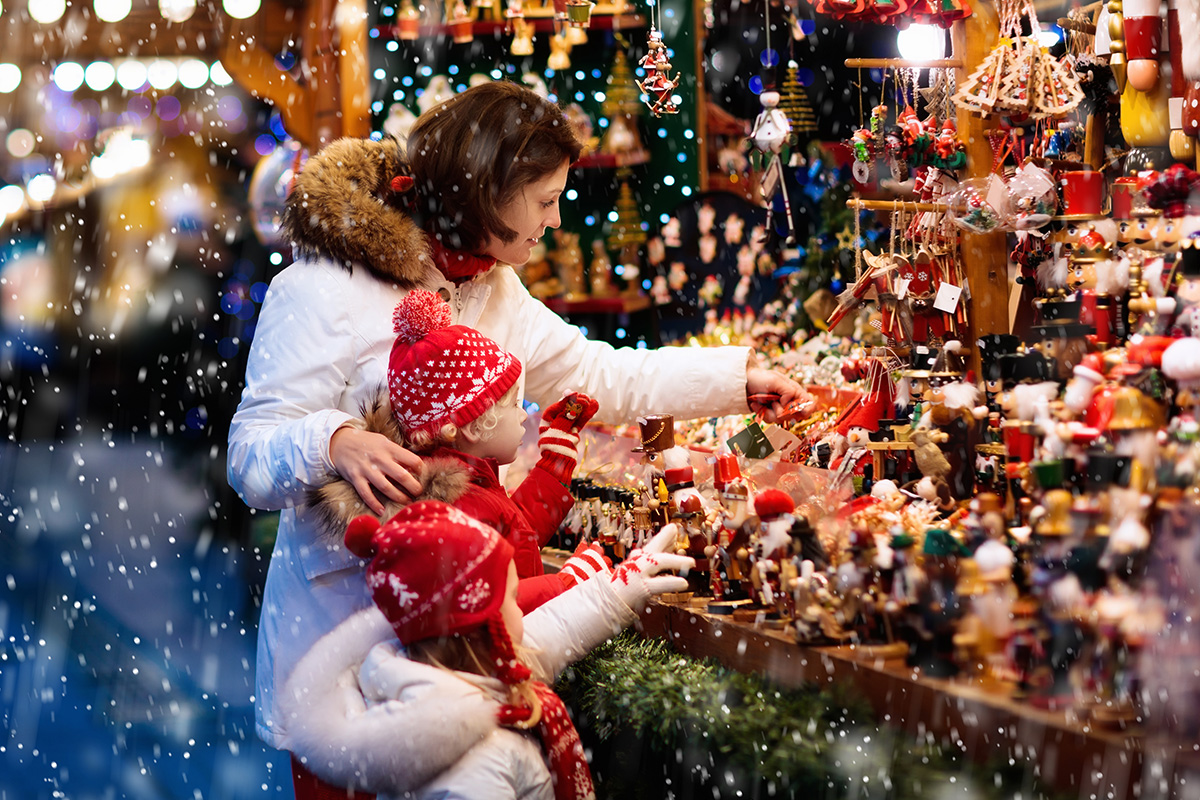 Any visit to Europe over the Christmas period will, sooner or later, run into one of the numerous Christmas Markets scattered throughout the continent. Although traditionally associated with Germany, today they are seen across Europe, from the Atlantic Ocean to the Black Sea.

Christmas markets, or Weihnachtsmarkt in German, are street markets and typically run for the four weeks of Advent leading up until Christmas. Some towns still refer to them as Advent Markets today. In the Alpine areas of Germany, Switzerland, and Austria, they are called Christkindlmarkt or Boy Jesus Market in English.

Luther suggested children should receive their gifts on the day Christ was born and from the Christkindl or Christ child. Hence, the name Christkindlmarkt. In many cities, the markets begin with the arrival of the Christkindl, often depicted as an angel-like girl and usually acted out by a local child.

The markets in Germany are typically held in a town square and nearby areas, with the stalls selling food & drink along with seasonal & local items from open-air stands. They brought cheer to weary villagers whilst adding light and colour to Europe’s long winter nights.

When was the first Christmas Market?

Historically, they date back to the late Middle Ages and traditionally come from areas associated with the Holy Roman Empire. At that time, this included the German-speaking parts of Europe, the eastern regions of France and parts of Switzerland.

In Vienna, the capital of the Holy Roman Empire, Emperor Albrecht 1 granted shopkeepers the right to hold market fairs in winter. The idea was that the townspeople could stock up on supplies to last through the cold winter months. 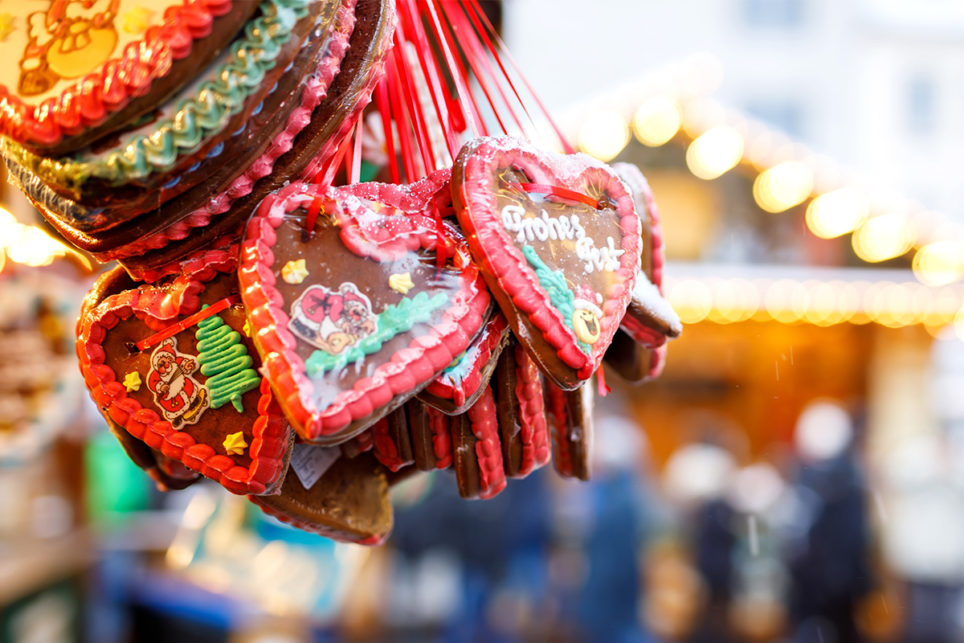 This market, which shows up in documents dating back to 1296, was called the ‘December Market’ and is considered the forerunner to the modern Christmas Market. Soon after, similar markets began popping up all over Europe, Munich (1310), Frankfurt (1393) and became known as Winter Markets or Wintermärkte.

Although the markets vary from country to country & region to region, several attractions tend to be present at all of them. Such as a nativity scene, zwetschgenmännle (figures made of decorated dried plums) & nusscracker (carved nutcrackers).

Many typical German foods are available such as pretzels, bratwurst (pork sausages) and beer. The cold weather, however, sees many seasonal specialities, including gebrannte mandelin (toasted almonds), lebkuchen (soft gingerbread) as well as glühwein (hot mulled wine) and eierpunsch (warm eggnog), which all help to avoid the winter colds.

Many regions have their specialities, such as stollen (bread with candied fruit) in Saxony or apfelwein (apple wine) and Frankfurter Bethmännchen from Hesse, Germany. Many stalls sell Christmas tree decorations, ornaments, handmade toys, and books and games.

The markets attract millions of people each year, making them popular tourist attractions during the Christmas season.

What are the best Christmas Markets?

There are hundreds of Christmas Markets today all over Europe, but a few of my favourite ones include.

Believed by most to be the original December Market, founded more than 700 years ago. Today the Vienna Christmas Market is one of the largest in Europe with one of the most spectacular backdrops, the Rathaus, or the Vienna Town Hall.

There is also a Children’s World which offers carousels, train rides and spectacular illuminations. There are also smaller markets in Maria-Theresien-Platz, Freyung, the Schönbrunn Palace and in front of the Belvedere Palace. Each year, more than 3 million people visit the Christmas Markets in Vienna. A true winter wonderland.

The Dresden Striezelmarkt is considered the first genuine Christmas Market. Founded as a one-day market in 1434, today it has more than 240 stands, bringing more than 3 million people to the city during December. The centrepiece of the market is a 20 m (66 ft) Christmas tree brought from the nearby Tharandt woods.

Its name, Striezelmarkt, comes from Strüzel, the name of a cake sold at the market. The cake is a light fruitcake and today is known as Stollen or Christstollen and is available in many parts of the world. Apart from the Stollen, another speciality at the Striezelmarkt is Pflaumentoffel. Plum devils in English, these figures made with prunes are designed to look like a chimney sweep, dressed in a top hat and brush.

According to the Guinness Book of Records, the Dresden Striezelmarkt is also where you will find the world’s largest Christmas Pyramid, at 14.62 m (47.9 ft).

A Christmas pyramid is a series of carousels decorated with nativity scenes and other Christian motifs stacked on top of each other in the shape of a pyramid. They originate from the Ore Mountains in eastern Germany, particularly around the town of Erzgebirge

The Munich Christmas Market dates to the 14th-century, when it began as a Winter Market. A highlight is the incredible setting, located in front of the neo-Gothic Town Hall on Marienplatz. The first “Nicholas Market”, as the people from Munich called it, was held in front of the Frauenkirche in 1642. Today the Munich Christmas markets still offer traditional gifts such as wood carvings from Oberammergau, gingerbread from Nuremberg and unique glassware from the Black Forest. Each day, from the balcony of Munich’s Rathaus or Townhall, visitors are entertained by a special Alpine Christmas Market concert.

These are only a few of the many Christmas Markets available. Other notable ones in Germany are Cologne, and Berlin. The markets of Salzburg in Austria, Strasbourg in France, Prague in the Czech Republic, and Gothenburg in Sweden are all worth a visit.

Make sure you check out all the Christmas Market trips offered by bwd vacations. They include tours by Trafalgar, Insight Vacations, Luxury Gold, Costsaver and Uniworld River Cruises.

Take care, and I’ll see you when you get here.