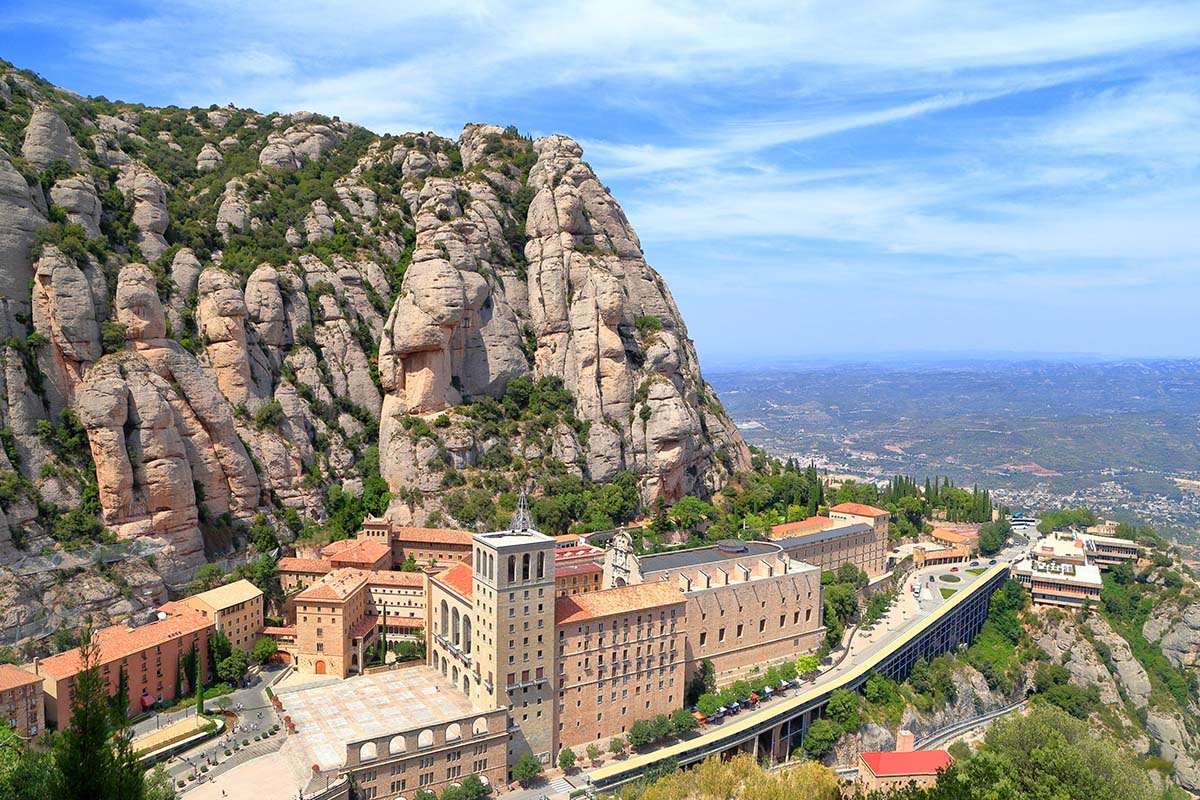 Located northwest of Barcelona is the 1236 m (4055ft) mountain of Montserrat, or in English, the serrated mountain. For tens of thousands of years, wind, rain, and frost have shaped this unique rock formation, leaving an area of breathtakingly natural beauty. On a clear day, you can see as far as Barcelona, the Pyrenees, and, if your luck is in, the island of Mallorca.

A place of pilgrimage

The mountain of Montserrat has been an influential place of pilgrimage since Roman times. Back then, the Romans built a temple in honour of Venus, their goddess of love, beauty, and fertility, in the mountains, which became a popular place of prayer.

In 711, the Muslims invaded Spain by landing near modern-day Gibraltar in the south. By 718, they reached Catalonia and its capital Barcelona, forcing many priests, monks, and religious orders to flee. Legend has it, a Benedictine monk, fearing the Islamic invaders, took his monastery’s prize possession, a small wooden figure of the Madonna and child, and hid it on Montserrat mountain just outside the city.

Many scholars believe St. Luke carved the figure in Jerusalem at the beginning of Christianity.

More than 150 years later, shepherds tending their flock on the mountain were amazed to see lights and hear singing coming from a nearby their camp. When it happened again, the shepherds, and a local priest, investigated where they found the figure hidden in a cave.

They erected a small church was to protect the figure along with four chapels, St. Mary’s, St. Iscle’s, St. Peter’s and St. Martin’s in the years that followed.

Situated at 725 m (2390ft), these tiny structures would eventually form the Abadia de Monserrat or the Abbey of Monserrat.

In 1025, Oliba, the Abbot of Ripoll and the Bishop of Vic, expanded these chapels to build a monastery to surround the church. Through the 12th and 13th centuries, the monastery grew in importance and wealth, and the monastery became an independent abbey in 1409.

Much of this wealth came from donations as pilgrims came from all over Europe to see the Virgin of Montserrat. These pilgrims included Pope Benedict XIII, Columbus, Cervantes, Charles I of Spain, Phillip II and Queen Isabella of Castilla.

Bernat Boil, one of the sanctuary’s hermits, accompanied Columbus to the New World, thus becoming the first missionary to the Americas.

In 1493, on Columbus’s second trip to the Americas, he named the Antilles Island Montserrat, a name it still has today.

St. Ignatius and the Jesuits

One of Montserrat’s most notable visitors was St. Ignatius of Loyola. Ignatius was a Spanish knight wounded in the Battle of Pamplona in 1521. During his recovery, he underwent a spiritual conversion to take him to the Holy Land.

On his way, he stopped in Montserrat, where he confessed to one of the monks. After spending the night praying before our Lady of Montserrat, he gave away his sword and fine clothes to walk to the village of Manresa, a few kilometres away. Over the next eleven months in a small cave, he laid the foundations for his new order, the Society of Jesus or the Jesuits.

Napoleon’s disregard for religion saw the French destroy the buildings and kill the monks during the Wars of Independence of 1811. By 1844, however, it had been repopulated and rebuilt.

During the Spanish Civil War (1936-39), Franco’s troops ruthlessly suppressed the monastery, executing 22 monks. It became a beacon for Catalan culture and nationalism from that moment onwards, with artists, scholars, politicians, and students visiting frequently.

On April 27, 1947, more than 100,000 people gathered to celebrate the enthronement of the Virgin of Montserrat with a mass in Catalan, a language illegal at the time.

The choir Escolania de Montserrat is one of the oldest choirs in Europe. Documents show the existence of a musical school and choir since the 14th-century. Every day about 50 choirboys sing a hymn called ‘Virolai’ which begins with the words “Rosa d’abril, Morena de la serra…” (April rose, dark lady of the mountain chain…). Consequently, the Virgin of Montserrat is sometimes referred to as Rosa d’abril or the April Rose.

A visit to the Monastery of Montserrat is a must for any visitor to Catalonia. The Abbey Museum houses many famous works, including El Greco, Dali, and Picasso. Not just for the significance of the buildings located there but for the incredible views from the serrated mountain. For the ten million Catalans globally, it is one of the most important shrines in Catalonia, with many making the journey there at least once in their lives.

You can visit Montserrat with Insight Vacations, Trafalgar, Costsaver, and Luxury Gold on their trips visiting Barcelona. For more information, check out all their itineraries with Travel by bwd.