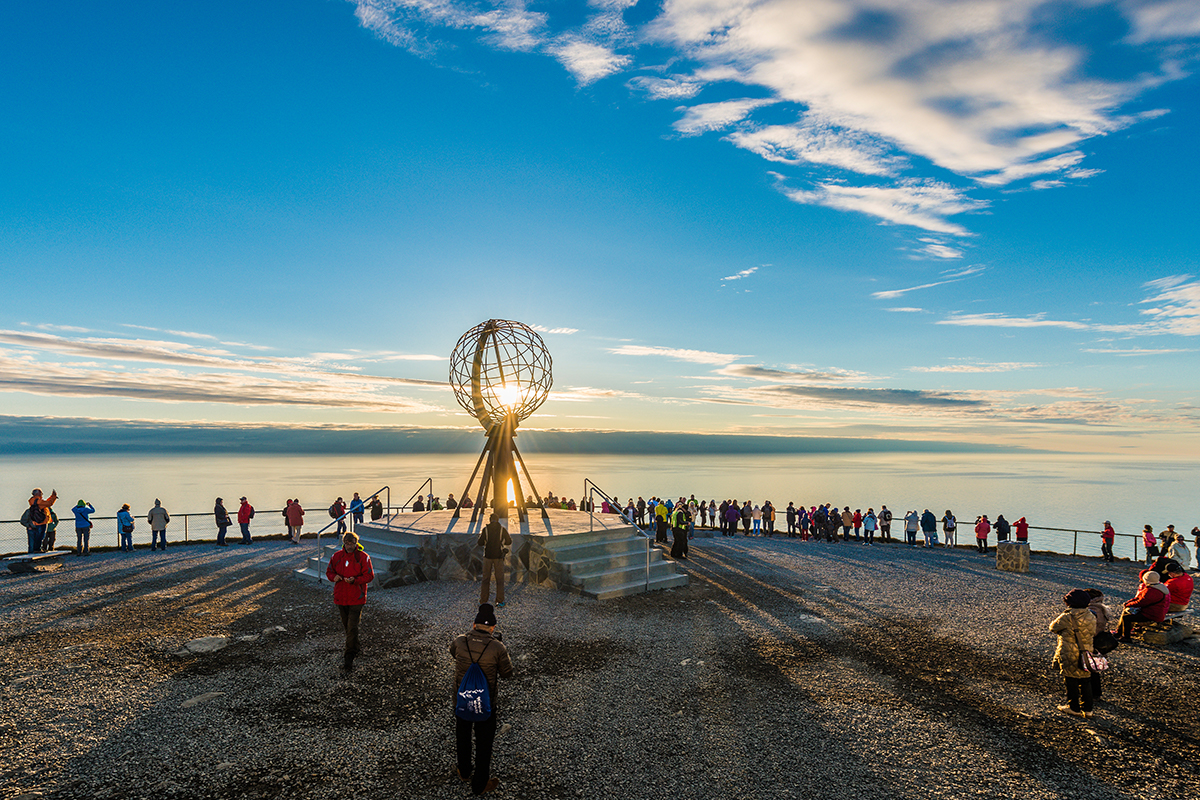 I have been fortunate to have had the opportunity to visit many beautiful places for work and personally.  Some sights, however, stand out in my memory more than others, the pyramids of Egypt, the Alps in Switzerland, and the Louvre in Paris. However, one of my most incredible travel memories was a visit to Nordkapp, Norway, where I saw the Midnight Sun.

Located in the Finnmark region in northern Norway, Nordkapp, or North Cape in English, is a peninsula on the island of Magerøya. You needed a boat to access the island in the past, but in 1999 the North Cape Tunnel was completed, and today they receive more than 200,000 visitors each year.

They usually arrive over the three months of summer, hoping to travel to the northernmost point on mainland Europe.

For many of these visitors, their destination is a 307 m (1007ft) cliff, from which they come hoping to see the Midnight Sun.

Nordkapp’s popularity started in 1553, when the British explorer, Richard Chancellor, rounded the cape trying to find the Northeast Passage, a shipping route for Europeans to reach the Pacific Ocean. Chancellor named the area North Cape, from which the Norwegians translated into Nordkapp. Many think Nordkapp is a town or a village, but it is the name of a cliff and a region. The region encompasses the island of Magerøya, the mainland, including the Porsanger Peninsula, the Sværholt Peninsula and both sides of the Porsanger Fjord. In total and area 925 km² (357 mi²).

What's in a name

Before Chancellor’s arrival, the old Norwegian name for the cape was Knyskanes. The municipality which it was part of was called Kjelvik, named after the main fishing village in the area. In World War II, the Germans destroyed the town, and the Norwegian decided not to rebuild it. After the war, the Norwegian government decided to rename the municipality Nordkapp, its name today.

The first tourist to visit the North Cape Plateau was the Italian priest Francisco Negri who arrived in 1664. He later published an account of his travels titled Viaggio Settentrionale, or Northern Travels. Negri often wrote with a scientific perspective, noting the flora & fauna of the area along with many observations of the native Laplanders.

What is the Northernmost point in Europe?

Many believe the 307 m (1007 ft) cliff is the northernmost point on mainland Europe at 71º10’21” N and 2103 km (1306 mi) from the North Pole. Unfortunately, it is not the case as Nordkapp is on an island, albeit one connected by road to the mainland. The northernmost part of mainland Europe is Kinnarodden or Nordkinn, 20 km (12mi) from Mehamn, Norway, on the Nordkinn Peninsula. If you include islands, Nordkapp is still not the furthest north as Cape Fligely on the Rudolf Island in Russia is much farther north at 81ª48’24” N.

If you don’t consider Rudolf Island, Russia, to be part of Europe, the northernmost point would be the island of Rossøya, on the islet of Svalbard archipelago, Norway

What is the Midnight Sun?

Like me, most visitors go to Nordkapp looking for the Midnight Sun. The Midnight Sun is a phenomenon that occurs in the polar circles, north of the Arctic Circle and south of the Antarctic Circle. Around the summer solstice, June 21/22 in the Northern Hemisphere, the sun doesn’t drop below the horizon for 24 hours, given fair weather.

As you travel closer to the poles, the number of days it occurs per year increases. Because there are no permanent human settlements south of the Antarctic Circle, apart from research stations, all chances to see this incredible phenomenon are in the Northern Hemisphere.

Countries located in the Arctic Circle include Canada, Iceland, Finland, Norway, Sweden, Greenland, Russia, and the state of Alaska in the United States. At Nordkapp, Norway, the Midnight Sun shines from 12th May to 31st July, a total of 79 days.

The extremes of this phenomenon are at the poles, where the sun can be visible for half of the year. As a result, the sun rises and sets once a year on the equinox at each pole. The equinox is the day the earth’s equator passes the centre of the sun.

At the North Pole, the sun shines continuously from late March until late September. Thus, at the poles, scientists refer to the Midnight Sun as Polar Days. In contrast, Polar Nights occur in winter, where the sun remains below the horizon throughout the entire day.

What are White Nights?

The sun drops just below the horizon in many places, and they experience a civil twilight, or midnight twilight. Many daytime activities, such as reading and playing sports, are still possible without the need for any artificial light. White Nights have become a common symbol of St. Petersburg in Russia, where they occur from 11th June until 2nd July each year. For the last ten days, they celebrate the phenomenon with a series of events known as the White Nights Festival

Many of the coastal towns in the Finnmark region are home to large colonies of seabirds. These include Norway’s largest groups of puffins and kittiwakes. In addition, the group of islands called Gjesvæstappan is the home of more than 2500 pairs of razorbills. The nesting season is from April to September, in which large numbers of White-tailed eagles, guillemots, razorbills, cormorants, arctic skuas and gannets populate the area.

For anyone visiting Scandinavia, a visit to Nordkapp is a must with its incredible combination of scenery, natural beauty, flora, and wildlife.

Trafalgar Tours, Insight Vacations, Luxury Gold and Costsaver all offer a wide of trips that visit Nordkapp, both in winter and summer. For a complete list of tours, visit Travel by bwd and start comparing what is available.